Directed by Francisco Reyes | Based on Hamlet by William Shakespeare

First premiered in 2014, this one-man show starring Francisco Reyes is a captivating virtual version that pays tribute to Shakespeare’s play.

Yorick, la historia de Hamlet is an appropriation of Shakespeare’s Hamlet, based on the main soliloquys from the play as narrated by Yorick, a character who in the original piece is played by the iconic skull of the deceased jester. It’s a one-man show whose video version also includes characters played by plasticine puppets.

The show was created in 2014 as live theater and was conceived for outdoor performances in villages lacking cultural infrastructure, with the ruins of buildings historically important to these locations sought out for its performances. The current video version only involves the actor playing Yorick (Francisco Reyes), who also moves the plasticine puppets. It’s an intimate show by a storyteller, lit only by the light of a candle. 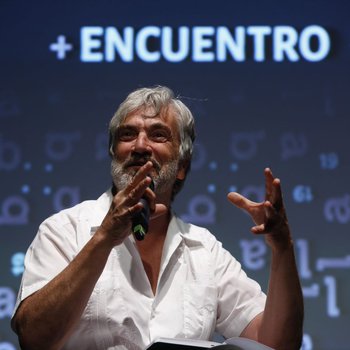 Theater as a family

This actor has enjoyed a long career in theater, cinema and television. Unhappy with his job as an architectural graduate, he turned to music and then theater. A small role in a telefilm on the life of Saint Theresa of the Andes opened the doors to TV work, consolidating him as one of the most famous faces on TV with his performances in popular soaps. He’s also had an outstanding career in cinema, with various collaborations with Raúl Ruiz standing out, as well as his role in the Oscar-winning film Una mujer fantástica more recently. In theater, he’s had acclaimed roles in recent productions such as La gaviota, La desobediencia de Marte and Encuentros breves con hombres repulsivos. In Yorick, la historia de Hamlet, the actor makes up part of a team with his children Elisa, Ismael and Simón.

He studied theater and theater directing at the Puckschule Experimental School in Stuttgart, where he learnt acting and directing according to the Michael Chejov method, as well as improvisation, juggling, poetry, dance, fencing, art history, commedia dell’arte, choral work and philosophy, among other things. He studied acting and directing under teachers Dr. Felix Müller (director of theater at Schauspielhaus Frankfurt/Main and director of the drama department at the State University of Music and the Performing Arts in Stuttgart, Germany) and Bernd Kühler (professor of theater teaching at the State University of Music and Performing Arts in Stuttgart). In 2014, he directed the original version of Yorick, the story of Hamlet, a traveling theater play that went back to theater’s roots by using a storyteller. That same year, he directed the dramatized readings of Shakespeare450 with Néstor Cantillana and Gary Counsil in the framework of the Shakespeare festival commemorating 450 years since his birth.

This English playwright and poet (1564-1616) is the undisputed universal master of literature and theater and of conveying his characters’ feelings, like pain, betrayal, love and jealously. That’s why plays such as Hamlet, King Lear, Othello, Romeo and Juliet and A Midsummer’s Night Dream are still completely relevant today and are read and performed all over the world.

“The piece is surprising, captivating and touching. The star’s capacity as an actor meshes with the correct camera angles, lights and shadow, background music and, of course, with the puppets”.

”Yorick, the story of Hamlet, is a virtual classic performed with excellent results, worth watching and enjoying”.

Why you should watch Yorick, la historia de Hamlet

-It’s a piece that cleverly combines elements of live theater - this an adaptation of a play that was conceived not only to be performed live but also in abandoned buildings - with audiovisual elements and puppet theater, thanks to the incorporation of the plasticine puppets created by Ismael Reyes.

-Even though actor Francisco Reyes - star of the show - connects with the audience through Zoom, the piece has elements that help create an intimate atmosphere, for example the fact that the scene is lit by a candle. It’s like we’re being told a story.

-It’s a good way to find out more about Shakespeare’s play and gain a new appreciation for it. “The majority of the text for Yorick, la historia de Hamlet has been taken from Hamlet, while other parts of it were written by us. Yorick bases its story on the soliloquys of Hamlet and tells the events just as they happen in the original piece: the appearance of his father’s ghost, the collusion of King Claudius, the meeting with his friends Rosencrantz and Guilderstein, the unmasking of the King, the conversation with Ophelia, and his mother, his duel with Laertes – Ophelia’s brother – and death. The only scene that is ours is when Yorick describes how he came to be the court jester and his relationship with the young Hamlet. Hamlet’s conversations with other people are sometimes used whole and sometimes not. We translated them, not trying to turn them into something universal, but simply so that the English poet’s flair could shine through”, say its creators.

-Hamlet: Supposedly written between 1599 and 1601, this is one of William Shakespeare’s most representative plays and one of his most performed ones. Divided into five acts, it tells the story of Prince Hamlet, who’s looking to avenge his father, King Hamlet, murdered by his brother Claudius so he could take both his widow and the throne. One night, the ghost of Hamlet senior appears to his son to ask him for justice, stirring up a number of emotions in him, from sorrow for his loss to anger and a thirst for vengeance for what his uncle has done. Hamlet is a play that masterfully describes things like corruption and betrayal.

- Puppet theater: In the book Aproximación al teatro de títeres by Argentine puppeteer Juan Enrique Acuña, this genre is defined as ‘a group of artistic disciplines and techniques through which a specific kind of show is created, performed and organized,

characterized by the use of certain expressive material elements’. Four different basic techniques are usually mentioned: stick, glove, shadow and either mobile or string puppets. All these forms have been improved upon by technological advances and experimentation. For example, there are now digital puppets and puppets with complex mechanisms that require several puppeteers.