After waging a long campaign to free Jorge Mateluna - which was unsuccessful for several reasons - this director and creative team wanted to find a way to acknowledge this failure. That is why they decided to look deeper into the meaning of freedom, creating a play that projects Jorge Mateluna’s release from an esthetic and symbolic point of view. This is how the play Colina came about, posing questions about the extent to which esthetics can liberate Jorge and questioning what is left of freedom after the play ends and Jorge is still in prison. Using Jorge’s voice and writing, Colina is an act of creation from prison itself, as well as an exercise in symbolic release.

Colina is a play based on unpublished audiovisual material recorded by English directors AlexandLiane, who interviewed Jorge Mateluna at his high security prison. Conceived as a play with three acts and an epilogue, the piece shows how Jorge has been deprived of his freedom since he was locked away, letting his voice run free on the stage through his writings and ideas. Created and performed using both artistic and technological tools and assisted by the previously-mentioned directors, Colina uses the deep fake technique to create a sharp and realistic image of Jorge Mateluna on stage.

This play is a joint piece of work with Jorge who, depending on what happens after the presidential elections in Chile and if he is freed or not - will write the third act from prison so the cast can then stage his work. This will turn the play into the symbolic, artistic and theatrical closure of everything that was carried out during the ‘Mateluna is Innocent’ campaign, even though it is clear that none of this is a replacement for Jorge’s release. 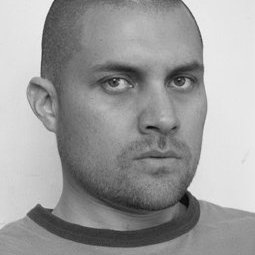 A playwright, scriptwriter and theater director (Santiago, 1971), Calderón is one of the most international figures in contemporary Chilean theater. In 2006, he cofounded Teatro en el Blanco, writing and directing Neva and Diciembre. Then came works such as Clase, Villa, Discurso, Escuela, Kuss, Beben and Mateluna. He directed Beben and Kuss at the Dusseldorf Schauspielhaus; Goldrausch at the Basel Theater and Neva at New York’s Public Theater. In 2017, the Royal Court Theater out on his play B. His work has been presented in more than 25 countries and, in film, he has worked on the scripts of Violeta se fue a los cielos and Araña by Andrés Wood, as well as El club, Neruda and Ema by Pablo Larraín.

The Escuela-Mateluna-Colina trilogy of plays were written and directed by Guillermo Calderón and produced by the same creative team to critique and reflect on the transformation of Chile over the last few years. This began with the military dictatorship, continued with the return to democracy, exploded with the social uprising of October 2019 and will - perhaps - culminate with the new Constitution. The plays deal with the current political debate on how to leave behind the dictatorship’s legacy and on who will take responsibility for those arrested during riots if official bodies will not.

Escuela (2013) tells the story of a group of youngsters in the eighties who receive paramilitary training in order to resist and take down the dictatorship. The play takes place during the transition, when the country is at a political turning point, allowing for reflections on resistance, the consolidation of a political and economic model imposed by a dictatorship and the role of political violence in transforming society.

Mateluna (2016) is the second play in the trilogy and was premiered in Berlin. It explores the ethical and artistic problems facing the creative team, given the erratic trial and imprisonment of Jorge Mateluna, who took part in the trilogy’s first play and was accused of a crime he did not commit. This play was part of the campaign called ‘Mateluna is Innocent’, aiming to free someone condemned for his past alone, and discusses justice and freedom.

Colina (2022) is the third and final piece in the trilogy, aiming to symbolically and esthetically release Jorge Mateluna from being unfair imprisoned for his beliefs.